In 1986, Tiffany St. Peter turned her back on a 4-year academic scholarship to the University of New Mexico to pursue modelling. 21 years later, in 2007, with many trials and tribulations in between, she does not regret her decision to walk away from a full scholarship. “I modeled for 5 years and traveled around the world; I don’t regret the experiences that modelling afforded,” says Tiffany.
Motivated by the path her friends had taken, she did give college a try shortly after her modelling career ended. “I was 22 years old. My high school friends had just finished college and were starting careers,” said Tiffany. “I wanted that for myself and tried but life kept getting in the way.”

At 24, Tiffany was married. She took some community college courses in interior design before she was accepted into the University of Washington’s prestigious architectural college. She needed to work to pay for college and by this time had welcomed a daughter into the world.

“It was just too hard to juggle family, work and a very competitive architecture program,” she said. “I tried, but family was a priority and the program was just too competitive.” After 8 years in Seattle, she and her family moved back to New Mexico to be closer to their extended families.

Now with two children, a son and a daughter, Tiffany continued to focus on being the best mom she could be, taking jobs that allowed her a flexible schedule so she could be home with her children during the day.

The Winding Road to NAU

One of those jobs led her down a career path that she could not have envisioned, and that ultimately paved the way to NAU and a very successful career. “I was doing all kinds of work, such as selling Pampered Chef and catering. At the request of a friend who worked as an accountant at a retail store, I took a temporary job filling in for a salesperson who broke her ankle. That woman never came back, so the job became more long-term,” said Tiffany. “Then, one day, my friend asked for some help with bookkeeping.”

Tiffany, who knew QuickBooks, eventually ventured out on her in own. In 2003, she started a bookkeeping business. With her children now in school, she was able to take on more clients and realize a more predictable income. This allowed her to help her husband, a construction worker, secure a home inspection certificate.

By 2007, however, their marriage was struggling. “He got the education to advance his career, but chose not to use it,” said Tiffany. “This was upsetting because as a family we made some financial sacrifices to provide him this opportunity, even as we were already struggling to make ends meet.”

“A bookkeeper and construction worker’s salary is not enough money to provide stability for a family. There were no benefits available to my ex-husband at the time and I was self-employed.  We were all on the state insurance,” said Tiffany.  “We struggled every month to pay our bills.”

“I was so tired of the stress of not having enough money every month that I knew I had to do something,” she added.  “I worked very closely with accountants at tax time for all of my clients.  I was waiting for the elevator one day and noticed a CPA firm’s name in the directory.”  “I can do that,” she thought to herself.

An internet search led her to National American University.  “I filled out the online form asking for more information and got a call back the very next day,” said Tiffany. “I often wonder if I would have changed my mind if NAU had not responded so quickly. It was one of those moments where I was taking an incredible risk, but also felt like doing nothing was as much of a risk.”

$20, a Prayer, and Words of Encouragement

With her last $20, food in the fridge, a tank full of gas, a maxed out credit card, no money in the bank and a whole lot of courage, she made the drive to NAU’s Rio Rancho campus to finish the enrollment process.

At the same time, back home, her husband was packing his things to move out. “As I was getting ready to leave, the counselor stood up, shook my hand and said, ‘You will never regret getting a degree.  You are doing the right thing,’” recalled Tiffany.

“I thanked her and when I turned to leave she stopped me and said, ‘I forgot there’s a $20 application fee.’ It was Friday and I literally had $20 to my name until my client paid me the following Tuesday.

I took a deep breath, reached into my wallet, closed my eyes and told myself, ‘This is the most important thing you can do for you and your children. You will make it until Tuesday.’  I pulled the $20 out and handed it to her. I literally gave NAU my last cent to commit to my education.”

NAU proved to be a perfect fit for Tiffany and her kids who were in first and fifth grade at the time. “The campus was only 3 minutes away and scheduling was so flexible. Plus, I was able to transfer my college credits from so long ago, which saved me time and money.”

Just 3 years later, in 2010, Tiffany was in her last semester and on track to earn her Bachelor’s degree in accounting. That March, she received a call from an employment agency who urged her to apply for a Senior Accountant position at Nambé, a Santa Fe company that produces beautiful silver dishes.

She got the job. “It was really unbelievable,” she said. “I had not even graduated but they trusted the NAU education; they knew I would be current on new accounting principles.” After four years at Nambé, she pursued a new challenge, applying for the Financial Controller position at Marble Brewing Company, a new but growing microbrewery in Albuquerque.  She got the job.

“The position allowed me to advance my career and increase my salary, while also being closer to home,” Tiffany explained.

Tiffany loops back and marvels at the path her life has taken. After being in what she calls “constant crisis mode,” the security her NAU education afforded her and children is truly priceless. “I recently bought my son a shoe rack,” she said. 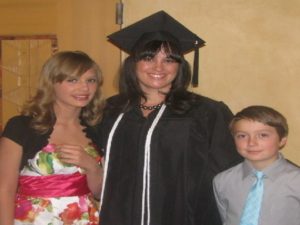 “You wouldn’t think a shoe rack would be so meaningful but my son pointed out to me that when he was little he didn’t have enough pairs of shoes to need a shoe rack. When the kids were growing so quickly I couldn’t afford for them to have more than a couple pairs of shoes.”

“This shoe rack is so much more than a kid with a bunch of shoes. The shoe rack represents hard work, perseverance, courage, and financial security.” Her son is now a sophomore in high school and her daughter is a junior at New Mexico State University.

“My daughter graduated a year early at sixteen with honors and earned a full scholarship for journalism. My son is in the sports medicine program at his high school and is already talking about where he’s going to go to college,” says Tiffany proudly.

“As much as we try to shelter our kids from our own stresses, they notice. Thankfully, they are taking to heart what they saw and learned with regard to hard work, perseverance and the value of an education.” If there was any doubt about the lessons her kids learned while she was working so hard to improve their lives, her son recently shared a story that drove home this point.

“His school set up mock interviews for freshman to help them prepare for job and college interviews,” Tiffany explained. “One of the questions was ‘If you could be any superhero, who would you be?’ My son answered, ‘My mom’ and proceeded to share how hard I had worked when they were younger to pursue my education while continuing my bookkeeping business and providing for the family.”